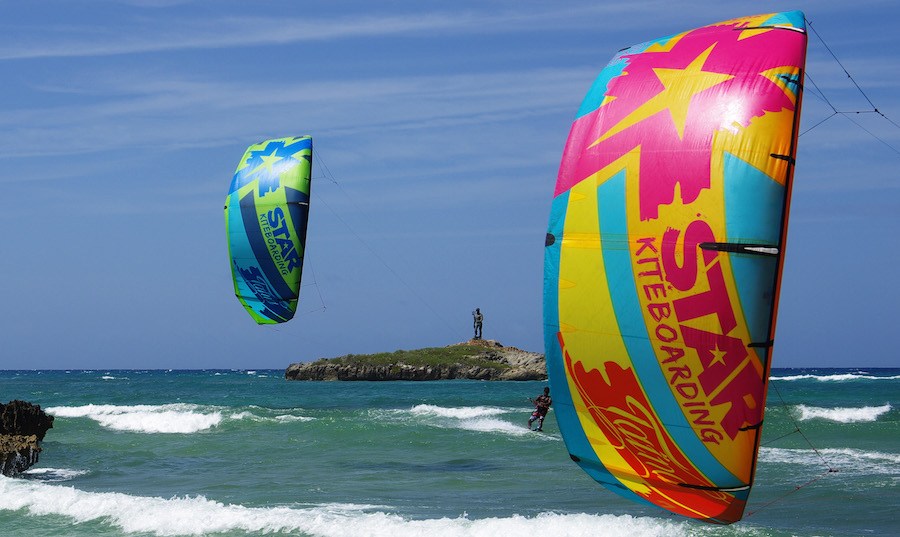 Lying at nearly the same latitude as Hilo, Hawaii, the beach village of Cabarete on the Dominican Republic’s north coast attracts watersports enthusiasts from around the world because of ideal wind and waves almost year-round.

This tropical destination also welcomes those of us who are content just to watch the colorful action, maybe working in a morning of snorkeling or a side trip to a mountain eco-lodge to force us out of our beach chairs.

Cabarete can easily trace its surge in popularity over the past two decades to a cadre of nouveau pioneers, primarily from Canada and Germany, who were looking for their watersports Eden. They found it in Cabarete.

At the time, the surf family was already branching out through windsurfing—surfing with a single sail anchored to the board. Here, kites were introduced as a new variation to the mix. The fourth and youngest surf sibling is standup paddlesurfing—the surfer uses an oar-like paddle to slice across the waves. All four disciplines have international followings and distinct locales on the Dominican north coast.

“The north shore of the Dominican Republic, in particular the beaches of Cabarete and Encuentro [15 minutes apart] offers a perfect playground for surfers,” said Marcus Bohm, who moved here nearly 25 years ago from Germany in his quest for the right mix of wind, water and sun. “Cabarete is ideal because of its rare and wonderful combination of consistent trade winds and warm waters.”

That combination centers around winds of 10 knots or better an average 300 days per year, along with an average temperature around 77 degrees (25 C), he explained.

Forget what you know about all those tiny little islands in the Caribbean. The Dominican Republic is big – very big. Due to its sheer size, the D.R. is unique in the region because it has a land mass large enough to change or block the easterly trade winds, creating better and more consistent surf than most other areas in the Caribbean Basin.

In fact, Hispaniola is the 22nd largest island in the world and Pico Duarte, the highest peak in all the Caribbean islands, stands over 10,100ft high. The island has five major mountain ranges and, not unlike the Hawaiian Islands, the land is hotter and drier in the south/west and a lush tropical paradise in the north and eastern shores.

Also similar to Hawaii, the northern part of the D.R. sees the biggest surf from mid-October through mid-April. That is when Atlantic winter swells pound the rugged Dominican coastline, miles of which are still undeveloped and fringed with reefs and sand bars, just waiting for winter swells to arrive and unload their power. Steep cliffs and rocky headlands protect many lineups from the afternoon trade winds, while coastal hills and canyons create light morning offshore breezes at select spots.

It’s a true tropical surf paradise. With a multitude of reefs facing various directions, the opportunities for waves seem endless. Crystal clear water and a backdrop of jungles, rock cliffs, lush mountains and empty beaches make the surf session as memorable as the waves themselves.

With well over 100 miles of exposure to the North Atlantic, waves that range from 5 – 15ft+ are produced. And when the surf comes up, there are more waves breaking than surfers to ride them.

Top destination of the caribbean – Published on Go Dominican Republic

DOMINICAN REPUBLIC – FEB. 13, 2014 – Award season is in full swing and the Dominican Republic Ministry of Tourism is pleased to announce that it has been recognized as the “Top Destination of the Year, Caribbean” by Expedia.com®, the world’s largest online travel agency. The prestigious award was presented by Gay Miller, Senior Business Development Director for Expedia.com’s Business Solutions, and Demetrious Canton, Expedia.com’s Market Director for the Caribbean, at the recent Caribbean Hotel Association Marketplace in Jamaica.
To decide upon the Caribbean collection, Expedia.com considered each Caribbean country’s overall performance. Dominican Republic welcomed a record 4.6 million visitors in 2013 and received a 33 percent increase in demand, making it the top growing market in the Caribbean. Since last year Dominican Republic has been one of the top visited destinations in the Caribbean for the U.S.
market as 1.5 million Americans traveled to the country in the past year, equaling 34 percent of the total tourist arrivals.
Magaly Toribio, Marketing Advisor for the Dominican Republic Ministry of Tourism, said, “We are extremely delighted with the ever-increasing growth of visitors who seek our breathtaking scenery and captivating culture. The efforts of the Ministry of Tourism exemplify our commitment to a strategic marketing plan and execution to further boost tourism arrivals.”
Read the full article here

We have exclusive Discounted Offers for November Up To 15th December!